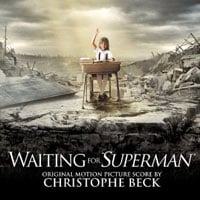 Waiting for Superman is a documentary movie that focuses on American public education & schools. It centers around a few students and families. The documentary was directed by Davis Guggenheim, who also directed & produced An Inconvenient Truth. So you know this movie is quality stuff!

Film composer Christophe Beck delivers a score that’s contemporary, fun, heartfelt and whimsy. A good example of those adjectives, look no further than track 2, “Presidential Address.” A lot of the tracks features violins, cellos, piano, acoustic guitar and other contemp sounding motifs. A lot of tracks sound great but the ones I liked are down below in the notable tracks section. I honestly never heard of this documentary before, but based on the score, it seems like it might be worth checking out.