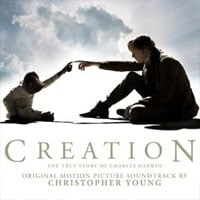 Creation is about Charles Darwin and is a part biopic, half fictional account of his relationship with his eldest daughter Annie. This was during the time when he wrote the controversial “On the Origin of the Species.” So I suppose this isn’t a movie that hardcore Christians and Catholics will want to watch huh? The movie stars real life married couple Paul Bettany and Jennifer Connelly as Charles and Emma Darwin.

Christopher Young was tapped to compose the music for this drama and I think he succeeded in delivering a satisfying score. The Creation score has a bit of a minimalist style to it, where it only sounds like he used a small amount of orchestra musicians. Pianos, violins, cellos, harps…things like that. The main motif we hear throughout the score sort of reminds me of James Horner’s Sneakers score. It has that horn flare in there a little bit, but I’m not sure if I’m describing it correctly. It’s not used all that much but just in a few tracks.

I don’t like every track on here but there are a few that stand out. Obviously the track “Creation” is the title track, and contains a lot of the themes you hear after that. I like the tracks when they feature a lot of the emotional and melodic strings. The track “Fuegian Children” is another track that stands out because it has an Irish jig in the middle of the track. Overall, I prefer Christopher Young’s music when he’s not composing them for a horror movie. Creation is another example of that.