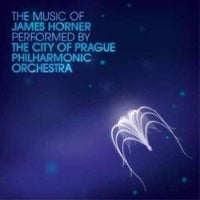 Just like other compilations, the City of Prague Philharmonic Orchestra has compiled the best James Horner’s pieces for Silver Screen Records. The music covered range from newer movies like the Karate Kid remake and Avatar to Braveheart to Star Trek II: The Wrath of Khan. 27 Tracks in total, spread out onto two discs! It’s a nice collection of music of Horner’s, and a wonderful place to start if you’re just getting into film music.

The first disc starts off with “I Want To Go Home” from the new Karate Kid movie. It’s a decent track but prefer the other tracks like “War” from Avatar, “Remember” from Troy, and “A Kaleidoscope of Mathematics” from A Beautiful Mind. Obviously, I think Braveheart’s music is by far the best on this compilation because it’s one of my favorite scores ever. Legends of the Fall is up there as well, and that ends the first disc. The second disc’s stand out tracks were Patriot Games’ “Electronic Battlefield,” “To The Rescue” from The Rocketeer, “Charging Fort Wagner” from Glory and “Willow.” “Willow” has always been a favorite of mine. Another favorite is “Charging Fort Wagner,” which the vocals seem quite different than the original. I don’t know what they are saying but clearly they weren’t saying that…right? Even though I haven’t seen the Star Trek movies, the music is still awesome. Star Trek II and III are represented here. Overall, while this is a great compilation for the newbie film score fan, I would have picked other songs to use instead of a lot of these.

Bottom Line: A good James Horner compilation but I would have picked other tracks.
Notable Tracks: Apollo 13, For the Love of the Princess, End Titles, Legends of the Fall, Willow, Glory, Star Trek II: The Wrath of Khan
Overall Rating: