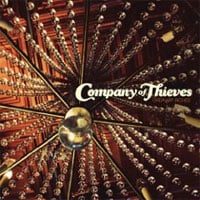 Indie rock trio Company of Thieves has had their new album out since January (digitally) and February (actual CD release). The band hails from Chicago, with Genevieve Schatz handling singing duties. Company of Thieves has been featured as an iTunes Discovery Download for their song “Oscar Wilde.” From never hearing about this band before, I was impressed with their style but not sure it’s for me.

The first thing I noticed when listening to Company of Thieves was how much Genevieve sounds like Sinead O’Connor. It’s something about her voice that reminds me of Sinead’s; maybe it’s the quiet, raspy-ness? Fiona Apple is another female singer that comes to mind. Musically, the band has more of a folk side than rock sound. The first half of the album is more up-tempo and interesting. The second half slows things down, and it’s kind of boring to me. Perhaps you’ll like this band more than I did?

Bottom Line: I liked a few songs
Notable Tracks: Oscar Wilde, Quiet on the Front, Around the Block
Overall Rating: