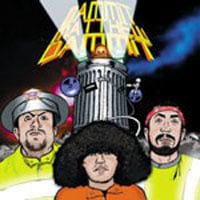 In their description, Dammit Matthew Dammit describe themselves as trash men from the year 3011 who have stolen a time machine in order to show the primitive humans of 2011 how to rock…and it shows!

The self-titled, DIY release from these Virginian rockers does indeed rock. The album is a simple and fun chord-heavy romp through the fields of old school rock and roll. The five original tracks are light-hearted and of sing-a-long quality and had me stomping my feet and bobbing my head in tune. DMD also throw in two radio edit tracks as well as a fairly straightforward cover of Blue Oyster Cult’s classic “Godzilla”.

There is nothing fancy about Dammit Matthew Dammit (and I’m calling them out on the time machine thing), but their self-titled release was just good old-fashioned raw rock music by a group of guys that just seem to be having fun playing music.