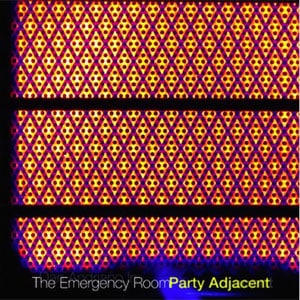 “Party Adjacent” is the second solo release from Dan Andriano who plays bass on the side for a little band called Alkaline Trio. You’ve probably never heard of them.

Being that I’ve always been a fan of Dan’s other bands such as Alkaline Trio and Slapstick, I’m surprised with myself that I haven’t listened to any of his side projects. Obviously, “Party Adjacent” is somewhat of a departure from Alkaline Trio but not as much of a departure as one may think. You still have a punk influenced fuzz-rock sound and Dan continues to show his songwriting/vocal chops. I believe that where “Party Adjacent” differs from the sounds of Alkaline Trio is with the harder rock influence and not so much of the goth rock/new wave feel that some of the more recent Alkaline Trio releases contain.

Personally, I’ve always preferred when Dan would have the vocal duties on Alkaline Trio songs, which isn’t a knock on Matt Skiba…who I’m also a fan of…but I feel that Dan’s mellow, gravelly voice is unique and would always seem to add that sense of desperation to the songs. It’s kind of like getting a taste of Matt Freeman singing on a Rancid album. You definitely get that feeling of urgency and desperation on “Party Adjacent”. Songs like the semi-acoustic “Don’t Have a Thing” and “Haunt Your House” are perfect examples of his unique vocal style. Whether it’s a slow song or one that starts off slow and gradually morphs into a punk song, his voice doesn’t change drastically so, but just enough to punch things home when need be.

While not familiar with Dan Andriano’s solo stuff before this album, I have definitely become a fan. “Party Adjacent” is a very good punk-influenced rock album from one of the better singer/songwriter/bassists out there today. I love the fact that, while Dan could have released his album on just about any punk label out there, he decided to stick with Asian Man Records. Whether you’re a fan of Alkaline Trio, Dan Andriano’s solo work or just looking for a good rock album, support Dan and Asian Man Records and go out and go out and buy this album!

Bottom Line: While there are similarities to the sound found on his Alkaline Trio releases, “Party Adjacent” has a heavier rock influence and is just a fun listen and a great album.
Notable Tracks: Lowrider, Enemies, Fire Pit, My Human Being
Overall Rating: