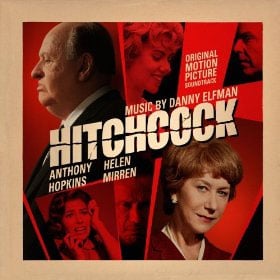 Hitchcock is of course, about the famous director Alfred Hitchcock. It’s an biopic directed by Sacha Gervasi and stars Anthony Hopkins and Helen Mirren. I honestly don’t know too much about Hitchcock or seen most of his films but I’m sure I’ll see them and this biopic at some point. The score for Hitchcock was done by Danny Elfman, a perfect choice in my mind.

Elfman’s score is what you’d expect out of him. Creepy motifs, Bernard Herrmann eerie style strings and screeches. “Celery” is a good example of Elfman’s style for Hitchcock. As soon as you hear that track, you will guess it’s Danny Elfman. A lot of the tracks are pretty short, ranging from ranging from 49 seconds to 3 minutes. There’s nothing that goes over 3:11 minutes though. Another track that stands out is “Explosion,” featuring some impressive violin playing. Almost sounds like something Jonny Greenwood would duplicate for one of Paul Thomas Anderson’s movies.

Hitchcock is a type of score to just put on and play because the tracks are too short to really appreciate the score. It’s a good score by Danny Elfman, I just wish the tracks were a little bit longer.