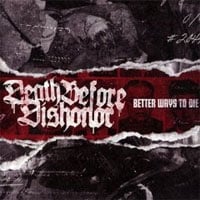 I don’t listen to hardcore as much as I used to, but when I do, I really dig the bands I hear. Death Before Dishonor sounds familiar but I don’t think I ever heard their music before? I could be wrong though. In any event, their newest album on Bridge Nine Records is definitely something worth listening to if you like to listen to people scream loud with fast guitars playing in the background.

Death Before Dishonor contains that Boston hardcore sound, but they also have a bit of punk rock influence in their sound as well. Working class is a phrase that gets thrown around to describe the band and I can see that. Death Before Dishonor avoids all those typical hardcore cliches and just plays their music. Bryan Harris’ vocals are rough and tough, while the rest of the band backs him up nicely. There’s really not much else to talk about with this album. I like it, you’ll like it if you like hardcore and that’s all that matters. Preview some of their songs on their MySpace page here.