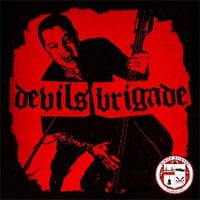 Devil’s Brigade is the side project from Rancid’s Matt Freeman. Alongside Matt is Tim Armstrong from Rancid (duh) and drummer D.J. Bonebrake from X and the Knitters. The band plays psychobilly with a few random folk punk style songs thrown in. The band have appeared on a few compilations but the band was put on the backburner when Rancid was touring & recording full-time again.

The first track “I’m Movin’ Through” just takes off and you immediately know what you’re gonna get with this album. Fast, deep snarly psychobilly! I really like the song “Shakedown” because it’s got a twangy feel to it. “Bridge of Gold” features Tim & Matt singing; I might be mistaken but sounds like Lars sings on that track as well. That one is a folk/cow punk style song and I dig it. “Gentleman of the Road” is a stand-out track because they slow things down a bit with a cool beat. It’s kind of like a mixture of reggae, rockabilly and other styles. Overall, I liked the album but it will take me a few listens to get used to it because of Matt’s rough vocals. His vocals are certainly fitting for this style, that’s for sure!