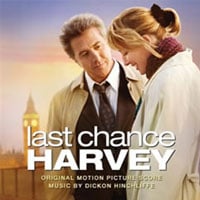 Last Chance Harvey stars Dustin Hoffman and Emma Thompson as 2 lonely people who have come together in the end. Harvey travels over to London for his daughter’s wedding, and that’s where he meets Kate, who works at Heathrow Airport. The movie sounds like a nice romantic film to watch. Who knows if I’ll ever get around to seeing it though.

The Last Chance Harvey film score was composed by Dickon Hinchliffe, and he delivers a sweet sounding film score. Dickon Hinchliffe is a multi-instrumentalist who was in the band Tindersticks. The score contains mostly piano & guitar driven pieces, with the orchestra serving up the strings in the background. The opening titles’ motif plays throughout the score. The longest track “The Walk” is the best track on the CD. I’m not sure what else to say about this that hasn’t already been said. The score is light music and something that would be perfect for when reading a book. But there are 2 tracks on the CD that might distract you if you do that. They would be song tracks, and not score tracks. I wish soundtrack people would put the songs at the end, that way people can listen straight through. Anyway, Last Chance Harvey is a decent score, but not sure it’s worth buying.