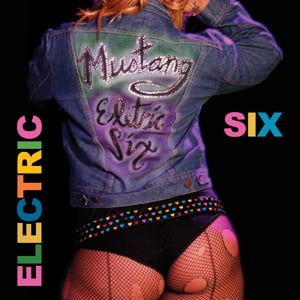 “Mustang” is my very first foray into a full length album by the band that gave the world the song “Gay Bar”. It has definitely been one weird experience.

Electric Six are waaaaay out of the boundaries of what one can classify as a “normal” band. There are a lot of genres blended in to just about every one of their songs. I don’t think that I’ve ever heard disco, metal and hard rock in the same song at the same time before, but songs like “Jessica Dresses Like A Dragon” sounds like a Dio song that somehow made its way onto the Saturday Night Fever soundtrack.

One of the things that I like about Electric Six is their goofiness and tongue-in-cheek songs about everything from Adam Levine to food stamps. Now most of those songs and just about every other song on “Mustang” make absolutely no sense…but go with whatever works for you I guess. It’s not a bad thing and I prefer the odd stuff anyway. The weirder the better. There is surely a Frank Zappa influence with the Electric Six.

Going into my “Mustang” listening session, I had no idea what to expect. Coming out of my “Mustang” listening session, I really don’t know what the hell I just heard. I do know that it was weird and funny, eccentric and oddball. Some songs were just god-awful and some songs were catchy as hell. As I mentioned before, it has definitely been one weird experience.

Bottom Line: Take some Frank Zappa, mix it with the Bloodhound Gang and throw it in a blender with some Lonely Island…and that is what somewhat reminds me of what “Mustang” sounded like.
Notable Tracks: Jessica Dresses Like A Dragon, Adam Levine, Show Me What Your Lights Mean, Miss Peaches Wears An Iron Dress
Overall Rating: