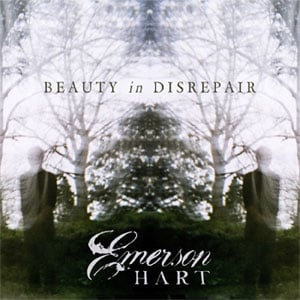 Emerson Hart of Tonic’s newest solo album Beauty In Disrepair is an album that will be going on my best-of list at the end of the year. I’ve been playing it non-stop since getting it early for review. I guess I’m one of the lucky ones to hear it so early since it doesn’t come out until April.

I’ll be honest, I never really heard of Emerson Hart or Tonic until I got some emails about him. Once I looked up Tonic and their songs, then I realized what songs they did in the 90s. “Oh yeah! I know those songs!” As a then close-minded ska and punk fan in the 90s, I didn’t really listen to the radio that much. Well, I still don’t but I’m a lot more open-minded with the styles of music I like nowadays. Anyway, Emerson’s had one solo album in 2007 (Cigarettes and Gasoline) but it’s been a few years since the follow-up. Beauty in Disrepair exceeds the previous album and then some!

As soon as you hear Emerson’s first single “Best That I Can Give,” you’ll be hooked in. It’s a song you’ll most likely hear on the radio. It’s just a catchy song that will get stuck in your head, in a good way. That song and the overall album have a bit of a downer vibe to it but there’s more to it than that. You can definitely tell Emerson was going through some things when writing this album. Loss, hope, being young and naive, and finding love again are some themes that pop up in Beauty In Disrepair. At least that’s what I take from the songs.

Besides the first single, other songs that stand out a lot include “Hurricane,” “To Be Young,” “You Know Who I Am” and “Another Life.” Many of the songs are pop/rock but there’s some crossover into country & folk in some tracks. Whatever style he plays, expect big hooks and harmonies! Emerson’s certainly a gifted singer and songwriter.

If you’re looking for some straight up alt-rock like Tonic, you might be disappointed. I’m sure if you hear Cigarettes and Gasoline, you probably know what to expect from Emerson’s solo material. I always seem to listen to this album either in the morning or late at night, but I guess it really depends on what mood you’re in. Not every song is all somber and slow though. “Another Life” and the last track “The Lines” are very upbeat. From not knowing much about Emerson or Tonic, I’ve certainly become an instant fan because of this album! I recommend checking this out if this sounds like your thing!

Bottom Line: One of my favorite albums of 2014 (so far).
Notable Tracks: Best That I Can Give, Hurricane, To Be Young, You Know Who I Am, Another Life, The Lines
Overall Rating:

Beauty In Disrepair, Best That I Can Give, BMG, Emerson Hart, singer/songwriter, Tonic