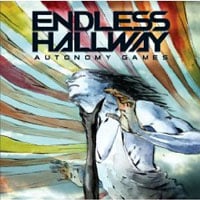 The debut album “Autonomy Games” of this Los Angeles band is an interesting one. I figured I would end up hating this band, but Endless Hallway succeeded my expectations. They aren’t just some generic rock band, that’s for sure!

The halfway point to the opening track “Autonomy Barriers,” I knew something was different about this band. You can tell they are serious about the music. Lead singer Ryan Jackson can actually sing and the rest of the band sound great too. The first few tracks are heavy, experimental rock, that have keyboards & violins mixed in there. Not sure if there were actual keyboards and violins performing on the songs or it was just computerized? Either way, I liked what they did with the songs. After that, the band slows it down a bit but those songs sound just as good. The band treats their music as an art form and it definitely shows in this debut album. Endless Hallway caught me by surprise, and I really liked this album! If you like bands like Stone Temple Pilots, People in Planes and Coheed and Cambria, then check out Endless Hallway!