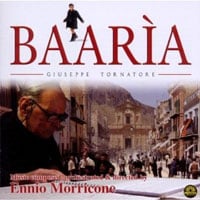 The incredible Ennio Morricone’s Baaria film score came out last year over in Europe, when this movie was released. Thanks to Silver Screen Records, this album is made available to North Americans now. Baaria is about the small Sicily town and seen through the eyes of a loving couple. The film is directed by Giuseppe Tornatore and it was opening film at the 66th Venice International Film Festival.

The opening track “Sinfonia Per Baaria” seems like a main title of sorts, mixing in lots of different themes. The almost 11 minute track also features dialogue and other things, which I’m not really a fan of. The second track “Ribellione” reminds me of the track “Rabbia E Tarantella” heard in Inglorious Basterds and Allonsanfan. Hey, even Ennio re-uses some motifs so lay off James Horner ok? This music is just beautiful and has a classical feel to it. You know what I mean, like orchestral and something that can stand on it’s own without being tied to a movie. You can just tell by listening to the music that it’s about Sicily (or Italy).

This score is so good I’m sure Quentin Tarantino will use the music for his future movies. Baaria should not be overlooked by film score and Ennio Morricone fans.