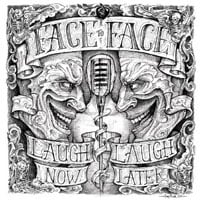 Broken up and back together again! Seems like a reoccurring theme amongst bands but when it comes to Face to Face, I think its great that the band is back together and making music again. “Laugh Now, Laugh Later” is the first album since 2002 and their seventh overall! Their last album “How to Ruin Everything” was one of their best albums I thought and this new release is more in line with that one than their earlier days.

“Should Anything Go Wrong” starts off the new album and it doesn’t sound like Face to Face took any time off. They pick up where they left off with their previous release, and the music has that similar style. “It’s All About You” is an awesome tune that just screams Face to Face. Catchy and fast punk rock! After all these years, Trevor hasn’t sounded any better and his singing voice is still one of the more distinct vocals in punk rock today. The first half of the album is better but that’s not to say the rest of the album is bad. There’s a few cool tracks in there like “All for Nothing” and “What You Came For.” Face to Face fans will like that the band is back with new material, but they still might crave music from their earlier days. I honestly think their newer stuff is a lot better than the early stuff. That’s just me though.

Bottom Line: Face to Face return to the punk rock scene very strong!
Notable Tracks: Should Anything Go Wrong, It’s All About You, Blood in the Water, All For Nothing
Overall Rating: