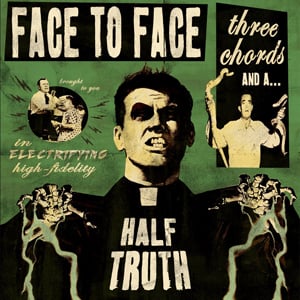 I remember the days when Face To Face used to be a punk band…and a pretty good one to boot. “Three Chords and a Half Truth” puts the bands punk roots on the backburner for a more polished hard rock sound.

Now the band hasn’t completely abandoned their punk sound, it’s just not as noticeable as it used to be. Most of the songs on “Three Chords…” are some of the slowest Face To Face songs that I’ve ever heard. I’m not going to be one of those sticklers that say the album completely sucks because of that. Kudos to the band for branching out and trying something new once again. The last time they tried to alter their sound the punk community literally got their panties in an uproar.

Songs like “Bright Lights Go Down” and “Across State Lines” bring back sounds of Face To Face past, but other songs like “123 Drop” and “Jinxproof” sound like they’re trying to push hard to get some heavy radio rotation. As I mentioned before, there are a lot more slower radio-friendly rock tracks and, while some of them are decent, others are sappy and weak…something that Face To Face has never really been known for.

“Three Chords and a Half Truth” is a different sound for Face To Face and it’s a sound that doesn’t really fit them. They were pretty good at writing some stellar three minute punk gems, but it’s a stretch for them to push an album of Gaslight Anthem-sounding rock tracks. The mellow sound does not become them.

Face to Face, Gaslight Anthem, Me First And The Gimme Gimmes, punk, Rise Records, rock, Three Chords and a Half Truth