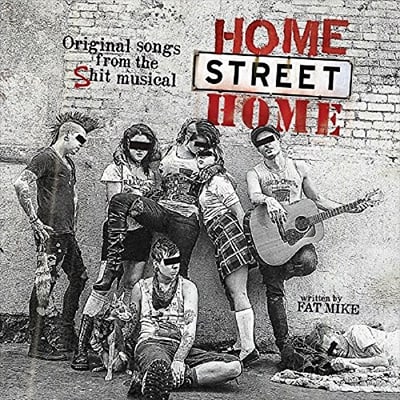 What do you get when you make a musical that celebrates victims that “overcome” abuse by never dealing with issues and instead re-live the abuse as a false form of strength by championing drug abuse, self-abuse, and sad excuses?

Obviously, the answer is different person to person, but I have a hard time not saying that you get something contrived and extremely boring, or to quote Fat Mike “This song sounds like fifteen you’ve heard before, Medio-core.” Every song could be replaced with every idea, concept and seemingly lyric as we have all heard before from old NOFX albums. From ‘Buggley Eyes’ to ‘The Man I Killed’. If you love the rehashing of the same old song from them, you will enjoy this. If you enjoy the Sid Vicious snarl and street punk oi, this is for you and you will enjoy it very much. If you would like something more that warrants your time to invest your empathy to characters telling a story that flows from one idea to the next by building on each other, I advise you to stay away or to give it a listen before you grab a copy.

I enjoy Broadway, from Andrew Lloyd Webber/Charles Hart (Phantom of the Opera) and Robert Lopez/Jeff Marx (Avenue Q) to Mel Brooks/Thomas Meehan (The Producers) & Trey Parker/Matt Stone/Robert Lopez (Book of Mormon). From the classical dramatic delivery with Operatic vocals to campy crude humor with modern Broadway Julie Garland phrasing inspired vocals. To see Jeff Marx as a part of this gave me a lot of hope and pretty high expectations as he is a great writer and has been here before. Still, I also understood that this was not “his” production and tried to leave room for everything that means. Home Street Home reached for most of the above mentioned feelings and styles, excluding the Opera styling, and the songs all unfortunately fell short. One song does not flow into the next, it is more episodic where each song just ends an idea and the next one can just jump to something entirely separate while you are still mentally where the last song/part of the story left you with no bridge to
cross. The songs are nothing more than a game of “what song has he rehashed for this one” by the 3rd track ‘Urban Campers’. By the end the 9th track ‘Missing Child’ I was not only un-sympathetic to all of the characters, but found myself wishing they had all simply died so I no longer had to feel apathetic of the abuse I am supposed to be saddened by. Track 10 ‘I’m Suicide’ sounds a lot like a Liza & Louise pre-pre-quel (which is proven true by the next track ‘Let’s Get Hurt’) was when I simply checked out as an original idea passed this point would be too late for me to care. I really wanted to enjoy this as I am a fan of all involved and liked the concept, but I really disliked it to the very end.

While I really disliked the content and songwriting, it would be wrong of me to exclude the positive aspects and not give credit where it is due. All of the performers did a very good job with what they were given, a very solid delivery. Missing Child is a perfect example of this as the vocals are very strong and emote sorrow so well. Congratulations to the performers for a job well done. It was also a very solid production with a great mix that puts a spotlight on the entire sound without leaving anything behind. A lot of work and care went into making this, and that definitely comes through when you listen, and there will be plenty of people who disagree with my take on it and can look past my gripes and enjoy what Fat Mike, Soma Snakeoil, and Jeff Marx have put out (as well as every musician who performed).

So congratulations on trying something new, and putting out a labor of love, but be weary of the praise this gets for simply being “brave”, as this isn’t what you may hope for it to be.