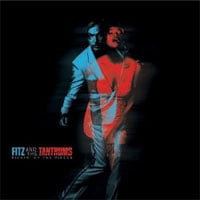 Pickin’ Up The Pieces is the debut album from the Los Angeles band Fitz and the Tantrums. Though their sound is deeply rooted in soul music, this band is no one trick pony. The band is often referred to as a Soul Indie Pop band. However, flourishes of funk and hip-hop as well as nods to many classic artists, can be heard all over the album.

Bandleader Michael Fitzpatrick let’s his stripes show on the record. Rather than taking a carbon copy of classic soul tropes, Fitzpatrick is forever pushing sounds, challenging himself to take the band’s music in new directions. This is readily apparent on the track ‘Don’t Gotta Work It Out.’ The song begins with a little hip-hop piano lick that sets a foundation for the verse before going into an organ and piano driven pre-chorus. These innovations are the most refreshing thing about this band. While Fitzpatrick is on record as a fan of the Motown and Stax sounds, he also names other forward thinking bands such as Radiohead and Talking Heads as influences.

One of the brightest spots in this band is vocalist Noelle Scaggs. Though she only sings lead on one song (Pickin’ Up the Pieces), she makes an impression that is not to be forgotten. I would love to see her come to the front more often and also perhaps blend lead vocals with Fitzpatrick.

The one thing the album suffered from was sounding a little too polished. The sound was always very clean and crisp. Dirtying up some of the tracks would go miles. There was also a lack of guitar on the record. Adding it could give more depth to the overall instrumental sound. It would also help to balance the fantastic fretwork of bassist Ethan Phillips, who lays down memorable grooves song after song.

Overall, the album is extremely fun, extremely catchy and a great summer record. Something to roll down the windows and blast as you are cruising. Though I have not seem them live, this band has garnered a lot of acclaim for their live show and personally, I can’t wait to see them.