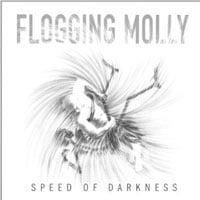 Flogging Molly are back with their fifth studio album, this time released on their own label Borstal Beat Records. Even though Flogging Molly put on one of the best live shows I’ve ever seen, I’ve been kind of tired of them. Speed of Darkness offers up something slightly different than their usual speedy Celtic-punk music…which might turn off fans. For the most part, this album is similar to Float than say Drunken Lullabies.

I don’t know why I don’t listen to Flogging Molly as much as I used, but maybe I’ve just worn them out. The same can be said for Dropkick Murphys; maybe I don’t like how popular the bands have gotten? Everywhere you go, you see frat boys wearing the shirts or thinking they are Paddy because they listen to Dropkick Murphys or Flogging Molly. When you bring up The Dubliners, Clancy Brothers and the Pogues, they ask who?

I still appreciate their music and listen to it when I’m in the mood, but it’s more sporadic these days unfortunately. Speed of Darkness has some tracks that sound great like “Revolution” and “The Heart of the Sea.” I particularly like “The Heart of the Sea” because it’s more in a folky style than Celtic. Their single “Don’t Shut Em Down” is the track that’s a bit different than the typical and it’s an decent track. It’s a catchy song and I like Dave King’s singing in it; except when he has to add the “EEEEEEEAAAAAAAAA” at the end of every verse. That’s probably the one thing that makes me not listen to the band as much. Once you notice it, it’s hard not to notice it. “Saints and Sinners” is another song that stood out to me. I think from this point going forward, any Celtic band that uses Saints and Sinners in their album or song title, aren’t allowed to use it. I’ve seen that pop up everywhere lately. I think Flogging Molly sound the best when they either do the speedy Celtic punk or the folk acoustic stuff. When they try to explore other styles, the music isn’t as strong. Hats off to the band for trying, but now go back to the way it was earlier on.