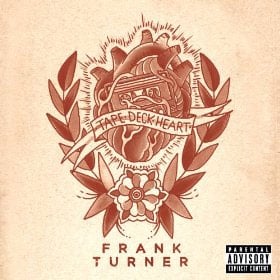 Frank Turner & The Sleeping Souls have come a long since playing in basements, bowling alleys and other smaller venues. Frank has played the Olympics in London and now he’s a mainstream success in the UK and the United States. It’s hard enough breaking out in the UK but Frank has done it in the US as well. As soon as I heard of Frank Turner back when Poetry of the Deed came out, I knew he was destined for success. Frank’s latest album Tape Deck Heart is his debut on major label Interscope Records and while I dislike the move, Frank deserves all the success he gets.


Tape Deck Heart has a regular release and then a deluxe version with a lot more songs on it. I recommend the deluxe edition album because quite honestly, the regular release feels like there’s too many slow songs and filler on it. Don’t get me wrong, I love Frank Turner’s music but I kind of wanted to skip more tracks than I would have liked. With that said, he has some of the best songs he’s ever done on this album like his first track “Recovery.” That song was one of the first we heard from the new album and it’s the track I have to listen to over and over again. The music video was done really well, which is one positive aspect of Frank signing with a major label: bigger budget. The song is full of energy, a fantastic anthem to sing & dance to, which is something Frank always encourages everybody to do at his shows. He even tells you that in “Four Simple Words.”

The next few tracks are just as amazing as “Recovery.” “Losing Days” has an emphasis on the mandolin, which I hope Frank uses more in his songs going forward, and then you have my second favorite track from this album “The Way I Tend To Be.” That song will get Frank a lot of attention on the airwaves. Frank’s previous album England Keep My Bones had the song “Rivers” and “The Way I Tend To Be” reminds me of that one in a way. I love both of those tracks though. “Plain Sailing Weather” & “Good and Gone” are decent too and so is “Four Simplest Words.” That song is perhap his rowdiest song to date. That one I remember Frank doing last year at one of his shows.

Sadly, after all those songs, things gets on the slow and depressing side. It feels like Frank broke up with someone and got all depressed about it in these songs. I wish he stuck with the more upbeat material of the first half of the album. If you get the deluxe edition album, there are more upbeat tunes to listen to like “We Shall Not Overcome,” “Tattoos” and “Time Machines.” Why those songs were omitted to the original release is beyond me. “Tattoos” is signature Frank Turner and stuff like this was missing in the album. Perhaps he’s trying to get away from the Billy Bragg style?

Frank Turner has come out with a lot of songs I’ll be listening to for years to come, but there are some tracks I’ll be skipping over a lot as well. With his next album, I really hope he writes more songs like “Recovery,” “The Way I Tend To Be” and “Tattoos.”

Bottom Line: First half of the album is amazing, second half…not so much.
Notable Tracks: Recovery, Losing Days, The Way I Tend To Be, Four Simple Words
Overall Rating: