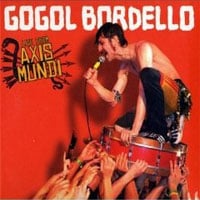 Gogol Bordello are one of the best live bands playing today. It was only a matter of time that their concerts were going to get filmed for a DVD release. Live From Axis Mundi is a CD/DVD release that fans will absolutely love, especially the full concert!

The CD contains 11 tracks, taken from BBC Sessions and various recording sessions and demos. The first few tracks are the BBC Sessions, from BBC-Radio 1’s “In The Company Of” with Colin Murray. That was recorded in March 2008, and it sounds great. The band performs “Ultimate,” “Wonderlust King,” “Mishto,” “Alcohol,” “American Wedding,” and “You Gave Up.” It’s always cool to hear live & recording sessions because the band performs the songs differently (sometimes). “You Gave Up,” “Stivali E Colbacco” and “Troubled Friends” are songs I haven’t heard before. The later 2 are unreleased tracks from Super Taranta and Gypsy Punk sessions. The songs are decent, but I could see why they might have been cut from the final albums.

The biggest selling point of this release is the DVD that comes with the CD. The footage was filmed in July 2007 at the Fillmore at Irving Plaza in New York City. Believe it or not, that show was the last time I saw Gogol Bordello. I was in the photo pit for 2 songs with the cameraman, so I’m glad the footage was FINALLY used. It certainly makes me feel better now that they used the footage because they made us stay in the photo pit for only 2 songs (it’s usually 3). Anyway, the footage was filmed over 2 nights but the way it was edited seems like it was filmed in 1 night. I noticed some things Eugene didn’t do in the show that I saw, like him jumping up to the second level of the club and singing around some women. They seemed to play different songs too. I believe they started with “Immigrant Punk” when I saw their show. The DVD opens with “Ultimate” and goes into “Sally.” Some of the highlights of that concert include “Not a Crime,” “Wonderlust King,” “Tribal Connection,” “Start Wearing Purple” and the finale of “Baro Faro.” I always remember Gogol Bordello’s concert endings because Pamela gets on the big drum as the crowd is carrying her. I’ve gotten many photos of that and the photos are still my favorite concert photos ever. If you’ve never seen Gogol Bordello live, seeing that is quite a sight.

The video footage was filmed in the pit, in the back of the club and even in the crowds as well. They really take the time to get some great camera angle and shots. I saw my balding head a few times in the footage, especially during “Immigrant Punk” in the extras section. In the extras, you get additional live songs like “East Infection,” “Avenue B,” and “Harem in Tuscany.” Other extras include the band’s music videos, recording session footage and some older footage of the band performing. The DVD is definitely the purchase alone, but having a CD with rare recordings is a bonus. Now that we got the inevitable live DVD out of the way, how about some new material?!

To see photos from this concert, please visit SkaPunkPhotos.com here.

Bottom Line: Gogol Bordello knows how to put on a live show, and it shows on the DVD!
Extras Rating:
Overall Rating: