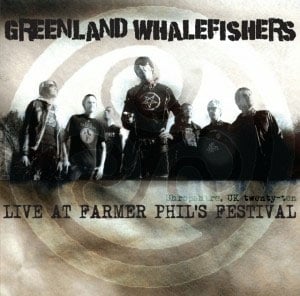 Norway’s answer to The Pogues, The Greenland Whalefishers’ latest release isn’t a studio album. It’s a live vinyl release, “Live at Farmer’s Phil Festival” to be exact. Thankfully the band sent over some mp3s for me to listen to since I refuse to own a record player. While it seems like I might not be able to ever see the Greenland Whalefishers live, hearing a live album is the next best thing…well unless they releases a live DVD/Blu-Ray than that would be better!


The concert took place last August in Shropshire, Shrewsbury England and there are 11 tracks in total. The first song is “4 Season Song” and they sound exactly how they sound on their albums. Greenland Whalefishers’ energy comes across in their songs and you can certainly tell their concerts would be a hell of an experience. Only if they decided to play in New York City (*hint hint*). Other highlights for the album include “Hit The Ground,” “I Just Saw You,” “I Am Roving,” “July Morning” and “Loboville.” Loboville is still my favorite GWF album but their other albums are awesome as well.

Arvid has that distinct MacGowan gravelly singing voice but when I listen to GWF, I know it’s Arvid singing and not MacGowan. Might be different for GWF non-fans but they definitely have slightly different styles & voices. What I like about the band is how their slow songs are equally as good as the fast songs. Sometimes I have to skip over slower songs but that’s definitely not the case with GWF. Plus their instrumental songs are not skip-worthy either. Besides the singing on the live release being so good, I also notice the whistle playing as well. Sounds like it’s lifted right from the studio albums.

While I don’t think the audio itself is the best in the world it’s still a decent recording. I prefer something with a little more clarity but this works, I’ll take it. Even if you don’t own a record player, this release still comes with mp3s to download which is a bonus for grumpy anti-vinyl people like myself.