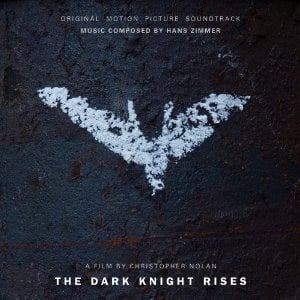 The final Batman in the Christopher Nolan series is upon us, which means another fantastic film score by Hans Zimmer! Everything that you have loved from Zimmer’s Dark Knight score returns and I can’t think of a better film score out this year than this one.


The soundtrack has 15 tracks in total, and as soon as it’s over, you’ll want to start the thing all over again. I must have listened to the album over 10 times already since the beginning of last week. Empire posted the entire score online so that’s where I’ve been checking it out daily. This is the type of score where you’ll listen to it before the movie, and get even more pumped when you’re watching it. I can only imagine how much I’ll love this album even more after I see The Dark Knight Rises!

The score opens up with a quick 37 second track “A Storm is Coming” and then goes into “On Thin Ice.” Essentially these tracks are just the setup to the themes, and what’s happening on screen. The next few tracks are where things start to pick up and it just sounds so cool! “Gotham’s Reckoning” is all Bane and I can’t wait to hear these tracks in the movie. Just like the Joker’s creepy theme in Dark Knight, this is a theme I will probably fear for the people’s safety in the movie because it sounds menacing. Then halfway through you get this chanting; like it’s a crowded stadium all chanting the same verses. You can’t really make out what they are saying but to me it sounds like “Faster Faster” but that doesn’t make sense. But the theme gives me goosebumps!

“Mind If I Cut In?” has to be Selina Kyle/Catwoman’s theme? Just from listening to it, it has this sly cat feeling to it; cat burglar sounds like soft chains being dangled in the background as light piano plays. It’s a different track from the rest but I love it. “Underground Army” contains some cool sounding beats to it, as if Harold Faltermeyer joined Zimmer for a track.
From here, the score goes from dramatic tracks to action cues back and forth. But for the most part, it’s action, action and more action.

The first half of the score seemed like it was more about Bane, and then the second half is where all the usual Batman themes kick in. It really gets me pumped up to see the movie because I just feel like screaming “YAY BATMAN!” when I hear that theme pop up. It’s a nerd thing to say but whatever. “Despair” seems like the first real track where it sounds like Batman is in the scene. Zimmer brings back some of older themes from Batman Begins and The Dark Knight in that track and uses them the rest of the way.

Bane’s theme mixes in with Batman’s in “Fear Will Find You” which is me probably stating the obvious that those two meet up during this track. Besides “Gotham’s Reckoning,” my favorite tracks are “Why Do We Fall?” and “Imagine The Fire.” “Why Do We Fall?” slowly builds up to that heroic Batman theme that I just love to hear. “Imagine The Fire” is a 7 minute plus track that contains a lot of pieces we already heard (and love), but all mashed together into one giant nerd-gasm of a piece! There are some beats and notes in there that we haven’t heard in the score that I wish were used more in this score.

The final two pieces are “Necessary Evil” and “Rise” and finish out the score heroically, somberly and magnificently! Did I use enough adjectives? For Batman Begins, I was little skeptical with the score from Zimmer. The Dark Knight’s awesome score helped me realize how good the themes were for Batman Begins. With Dark Knight Rises, Hans Zimmer uses what he has done for the previous movies and clearly composes one of his best scores ever. Everything about this score is truly epic in sound and scope. I truly believe this year’s Oscar for film music will be between The Dark Knight Rises and The Hobbit.

Bottom Line: Amazing score and looking forward to seeing what Hans Zimmer will do with Superman’s The Man of Steel next!
Notable Tracks: Gotham’s Reckoning, Mind If I Cut In?, Underground Army, Despair, Fear Will Find You, Why Do We Fall?, Imagine The Fire, Rise
Overall Rating: