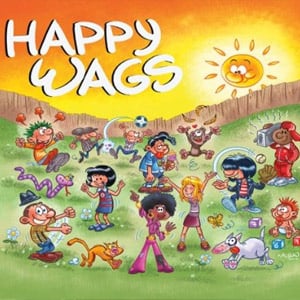 Jesse Wagner is known for his aggro dirty reggae band The Aggrolites and in between playing with the band, he recorded a children’s album. The music ranges from ska, reggae, calypso, folk, punk and other genres. Whatever music he plays, both children and adults will love it!


Jesse’s opening song “The Lion, The Snake and The Monkey” is a Calypso sounding song that’s very reminiscent to Harry Belafonte. Even though the song is fun, it will still get embedded in your brain. “Use Your Words” is a straight up ska song that will get both the kids and parents skankin’. I know when I have a kid or two, I’ll probably be playing this song a lot. I wish Jesse stuck with the ska and reggae though, because the funky/80s song (“Don’t Touch The Buttons”) sounds a bit silly to me.

I find the track “Pee Pee in the Potty” humorous, but maybe that’s just because I’m an immature idiot. It’s a good song to play to kids who are trying to be potty-trained….or drunken parents who don’t know the difference between their closet, their pants or the toilet. “They Wanna Play” is a Ramones sounding song and hearing this makes me wish Jesse made a Ramones style punk rock album!

Bottom Line: For parents sick of hearing the Frozen soundtrack!
Notable Tracks: The Lion, The Snake and The Monkey, Use Your Words, Pee Pee in the Potty
Overall Rating: