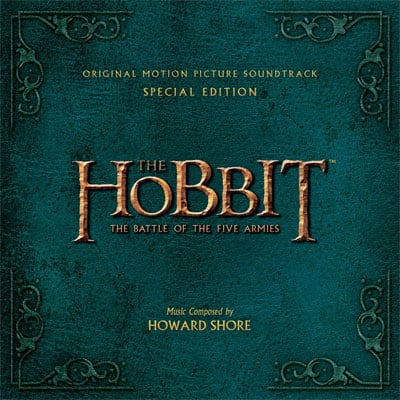 The final Hobbit movie is upon us and sadly, so is the last film score from Howard Shore as well. The Battle of the Five Armies is going to go out with a bang and the score vastly improves from The Desolation of Smaug. I still prefer the Lord of the Rings music over the music from The Hobbit but these scores are still very, very good!

BOTFA’s score is an improvement over DOS’s score in that the tracks are more exciting and have more depth than just background noise. DOS had some memorable themes like Tauriel’s, Bard’s and Smaug’s but other than that, there weren’t that many standouts. It worked perfectly fine for the movie but listening to the score on it’s own, it wasn’t as exciting as the other scores from the Hobbit or LOTR.

Like the rest of the Hobbit scores, there’s a regular release and deluxe edition. The deluxe edition has two discs, with some extended score tracks. Disc 1 kicks off with “Fire and Water,” which just continues where Desolation of Smaug left off, with Smaug about to attack Laketown. Even with the first track, you can tell Howard Shore & company put everything they had into this score. There’s more thematic cues from the past movies (The Hobbit and Lord of the Rings), there’s more choir singing and it’s just more interesting. From the last two movies, one of the themes that really stands out is the theme for Tauriel and Kili (that elegant flute motif). I’m really looking forward to see the scene that “Guardians of the Three” plays in because that tracks sounds intense! It’s probably the scene that happens with Gandalf, Elrond, Saruman, Galadriel and Sauron.

Hearing the beginning of the track “Mithril” was a pleasant surprise because it’s a throwback to when Bilbo gives the Mithril shirt to Frodo in Fellowship of the Ring. “The Battle for The Mountain,” “The Darkest Hour,” and “Sons of Durin” is a good stretch of music. Obviously we’re not going to like what happens for the track “The Fallen” but at least the track is good. Some somber stuff in there and people who read the books probably know who’s going to perish. “To The Death” gives me goosebumps, especially when the choir kicks in at the end. Shore merges all 6 movies together nicely with “The Return Journey” and “There and Back Again.” I can just have a whole score filled with music from the Shire. I just love it!

One of the last songs on the album is from Lord of the Rings alum actor/musician Billy Boyd singing “The Last Goodbye.” It’s a very fitting song to end the trilogy and for the movies in Middle Earth. It’s also fitting that an actor that was apart of the original trilogy is singing the end credits song. I’d take this song over the boring Ed Sheeran song from The Desolation of Smaug anyday! The song is very similar in songwriting, song structure and style to “Into The West” by Annie Lennox. Maybe it was done that way on purpose? For the deluxe edition, a couple of bonus tracks end the score. Some of them were scenes from the extended edition for Desolation of Smaug so it was nice to see those were included on this. There’s a very Celtic-ish track called “Ironfoot,” which I’m assuming is for Billy Connolly’s Dain Ironfoot character. I would have loved to have heard more of that motif throughout the score but I’m guessing Dain isn’t in the movie all that much.

The scores for the Hobbit movies are excellent but don’t really come that close to the perfection that is The Lord of the Rings. With that said, I’m extremely happy Howard Shore was chosen to do these 3 movies because the music is all consistent now. It’s the same thing with Star Wars, it will just be weird seeing one of those movies without John Williams’ music. Sadly, It will happen eventually but hopefully not for awhile. Now if you would excuse me, I’m going to go listen to the music from The Lord of the Rings…for consistency purposes.

Bottom Line: Howard Shore’s trilogy score ends on a high & familiar note
Notable Tracks: Fire and Water, Gathering of the Clouds, Mithril, The Darkest Hour, Sons of Durin, To The Death, There and Back Again, The Last Goodbye, Ironfoot
Overall Rating: