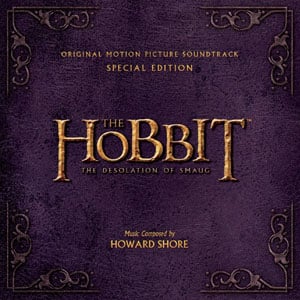 Howard Shore’s latest offering in the Tolkien world is The Desolation of Smaug, part 2 of the Hobbit trilogy. First few listens leaves me a little disappointed but once I see the movie I think I’ll be able to appreciate the music more.

The reason why I was a little disappointed with Shore’s score is the lack of themes. With all the other Lord of the Rings and Hobbit scores, he had several themes that stood out but this time, it just seems like action cue after action cue. That’s not to say this score isn’t excellent because it is, I was just hoping for more stand-out themes. Especially for such characters as Bard, Beorn, and Smaug. Smaug has a few motifs in there but it’s more action and suspense stuff again. I’m sure the music is fitting with the movie but I was hoping for something different. The Smaug music has a Jaws feel to it because there’s these heavy drums that act as walking from the massive dragon.

The first few tracks of the score are a bit quiet and don’t really stand out. I thought “House of Beorn” would be more interesting and have some type of theme but it’s more suspenseful than anything. “Flies and Spiders” is a good track that stands out, and just hearing the track is making my hair on my neck stand up. I can only imagine what the scene will be like. The Ring theme shows up in that track as well. “The Woodland Realm” follows that one and is also a notable track with lots of subtle choir singing. Think of the music of the Lothlorien but more mysterious and dark. At the end of the track, there’s a few notes from a clarinet or another wood instrument that I really, really like. Could it be the music for Legolas or Tauriel (new character played by Evangeline Lilly)?

The second disc is more of the same. Some tracks are good background music and set the tone for the movie. Other tracks are more noticeable like “Durin’s Folk,” the long “On The Doorstep” and “Kingsfoil.” When Smaug shows up at the end, the music gets intense and exciting as well. I particularly love the last track the most, which is “Beyond The Forest.” I really like the child choir singing for LOTR and Hobbit scores the most and think it works the best. It’s a shame its not used as much as it is.

If you get the special edition score, you’ll have 2 discs that’s about 2 hours long. Some of the tracks you get from the normal edition are extended. With all of the LOTR and the Hobbit: An Unexpected Journey movies, there was one song at the end to play over the credits. This time it’s from British musician Ed Sheeran who plays “I See Fire.” I’ve been a fan of almost every track Peter Jackson and company decided to include on their soundtracks but this one felt underwhelming. To be honest, just felt like a big downer after hearing fast-paced and thrilling score music for 2 hours. I wasn’t really a fan of The Two Towers’ track either so I guess this is just the middle of the movie..err soundtrack slump with songs. The song is okay, it’s just kind of boring for me and no where near the greatness of Neil Finn’s “Song of the Lonely Mountain” from last year.

With all my complaints, I still very much enjoyed this score a lot. Any time Howard Shore composes something for Middle Earth, the music sucks me back into Middle Earth. I just wish there was a few more motifs throughout the score.

Bottom Line: I prefer the music from An Unexpected Journey but this is still a great score!
Notable Tracks: Flies and Spiders, Woodland Realm, Durin’s Folk, Kingsfoil, My Armor is Iron, Beyond The Forest
Overall Rating: