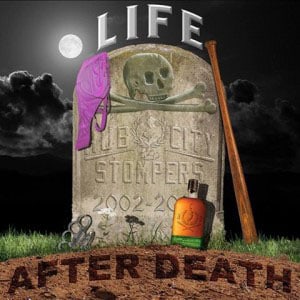 After a year or so merging with/reforming Inspecter 7, the Hub City Stompers are back with the aptly titled “Life After Death”.

As I mentioned earlier, the variety of sounds if prevalent throughout this album…you have your faster punk infused songs like “Benny Bash” and “Pants Music”…and then there’s the psycho ska stuff such as “Untouchable”, “Shallowed Be” and “Dirty Dozen”. One also cannot forget something that the HCS can do well but are oft times overlooked for…their classic ska songs. Some of the best tracks on this album are traditional and two tone influenced songs such as “Lifeline”, “Black Claddagh”, “The Take Back” and “Imperial”.

“Life After Death” is an eclectic ska punk mix with everything that makes the Hub City Stompers great…and then some. It just feels right to have the Hub City Stompers back and better than ever. The variety, dry humor and wit are there and when you top that off with the musical craftsmanship and talent of the HCS you are bound to get one hell of an album…which “Life After Death” most certainly is. I’m glad that they have risen from the dead…hopefully for good this time.