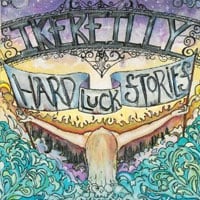 Ike Reilly plays Americana & folk rock mixed in with some R&B, punk rock. He’s quite the storyteller, and he also hails from the Chicago area. I never heard of Ike Reilly before but now I do!

His latest album “Hard Luck Stories” was just available on digital format but his fans wanted it on CD, so the guy’s obviously got a dedicated fanbase. His solo album took me by surprise because for an artist I never heard of, he certainly made me want to check out his previous stuff. I didn’t like the first track “Morning Glory” as much as the others. I think Ike displays variety in his music, particularly in tracks like “7 Come 11” (a groovin’ classic rock) and then in “The War on the Terror and The Drugs” (country rock). On the later track, he duets with Shooter Jennings, which was cool to hear.

Ike Reilly reminds me of a young Bob Dylan, Tom Petty or Willie Nile. I know I keep bringing up those guys in reviews but when musicians sounds like some of those guys you have to mention it! Most of Ike’s songs are upbeat rock songs but he also slows it down sometimes. I think people will like this album, I know I did. Check out some of his music on his MySpace page.

Bottom Line: Ike Reilly knows how to rock!
Notable Tracks: 7 Come 11, Girls in the Back Room, the War on the Terror and the Drugs
Overall Rating: