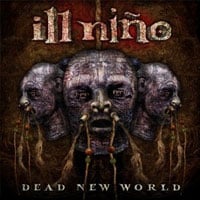 Ill Nino is a Latin nu-metal band from New Jersey. So, they have two strikes against them without even listening to them yet. Nu-metal and from New Jersey. Although, I can’t really poke fun since I live in the State now. Doesn’t change the fact that the state still sucks.

Their newest album Dead New World came out in October of 2010, but I really had no desire to listen to this until now. Or maybe I was just sick of looking at it on my review shelf. There’s nothing special about this band; nothing that stands out from the rest. Nu-metal, metalcore, whatever you want to call it, their music just sounds generic to me. Chuggy chuggy guitars, lame singing, and I generally got bored with this album pretty quickly.