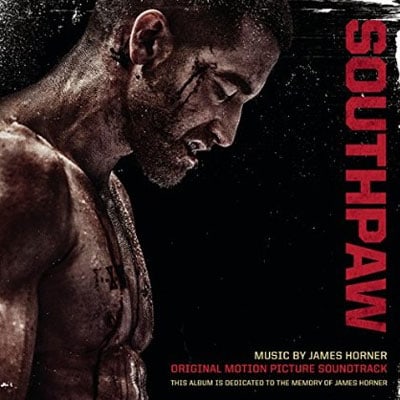 It’s a bit heartbreaking typing up this review since this will be the last review I do of a new James Horner score. Horner tragically died in a plane crash in June and Southpaw was the last score he worked on. Horner was one of my favorite composers, even though some of his scores sounded similar at times. That was his style and I’m still going to miss it. If you’ve never heard Horner’s music before, be sure to check out: Braveheart, Titanic, Willow, Legends of the Fall, Star Trek: Wrath of Khan, The New World, A Beautiful Mind, Avatar and many more!

Southpaw stars Jake Gyllenhaal, Forest Whitaker, and Rachel McAdams. It’s directed by Antoine Fuqua and written by Kurt Sutter. It’s about a boxer who wants to retire and be with his family when something tragic happens. If you watch the trailer, they pretty much spoiler their own movie.

The score itself sounds a little bit different than what Horner was used to doing. The first track “The Preparations” has subtle piano notes in there mixed with pulsating beat that you hear in just about every movie trailer these days. After that, the score has a Patriot Games feel to it, minus the Irish motifs.

“Suicidal Rampage” feels different from other tracks because it’s got a lot of noise for the majority of the track until the end. Then it goes to an intense but calming beat. A lot of the piano-centered tracks are the better tracks. “A Long Road Back” is probably my favorite track because it’s just a simple song with a small orchestra, and a basic sound. The way that Horner does it though makes it uplifting; i’m assuming it’s during an uplifting moment in the movie.

The overall score is calming at times, and very moody at other times. I’m not sure how much I will listen to this one but it’s got a few tracks worth returning for. It’s just a big time bummer we won’t be able to hear new music for the Avatar sequels from James Horner anymore. Like the last track is called (“A Quiet Moment”), take a moment to reflect on James Horner’s massive career and go listen to one of his best scores.