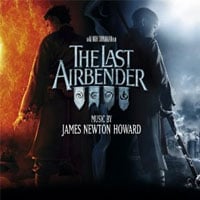 The latest M. Night Shyamalan film is the Last Airbender, based on the highly popular animated TV series that airs on Nickelodeon. I haven’t seen the show before or know anything about the series or movie all that well. I guess Air, Water, Earth, Fire (no Wind?) are 4 nations tied together when Fire Nation begins a war against the other nations. The lone Avatar who can control all 4 elements is Aang (Noah Ringer), he teams up with a few others to help restore balance to the 4 nations. Um allrighty, that didn’t really make any sense to me but I’m sure people who are into the series will know what’s happening.

The one guy M. Night can count on to make his movies (somewhat) interesting is James Newton Howard, the composer who has worked on all his movies. I haven’t seen or heard music from The Happening, since it got such crappy reviews so I never ended up listening to that score. This score is pretty good and I’m glad to finally hear something new from Howard. It has a very John Williams feel to it, lots of fanfare, horns and dramatic feel (“The Airbender Suite”). After the excellent “The Airbender Suite,” things settle down for a little bit. You hear a bit of an Asian flair in the songs, which is understandable. The most notable thing you will hear in James Newton Howards’ scores for M. Night is the Bernard Hermann flurry of strings, and this score has plenty of that as well. Well he has to create some suspense! It’s not really noticeable though, only to people who listen to a lot of scores.

The order of the tracks seems out of whack. You have a suite that starts things off, a prologue that’s in the middle of the album; just seems a bit off to me. Not sure if the order was done on purpose or not. I think as the soundtrack goes along, the tracks get more exciting and interesting (“Prologue,” “Blue Spirit)”. There are 12 tracks in all, but each track is at a decent length. The last track is “Flow Like Water” and it’s just a beautiful track to end things with. Although it would have been more fitting to end with the Suite I think. Either way, The Last Airbender’s score is just another example of the perfect collaboration between director (M. Night Shyamalan) and composer (James Newton Howard).