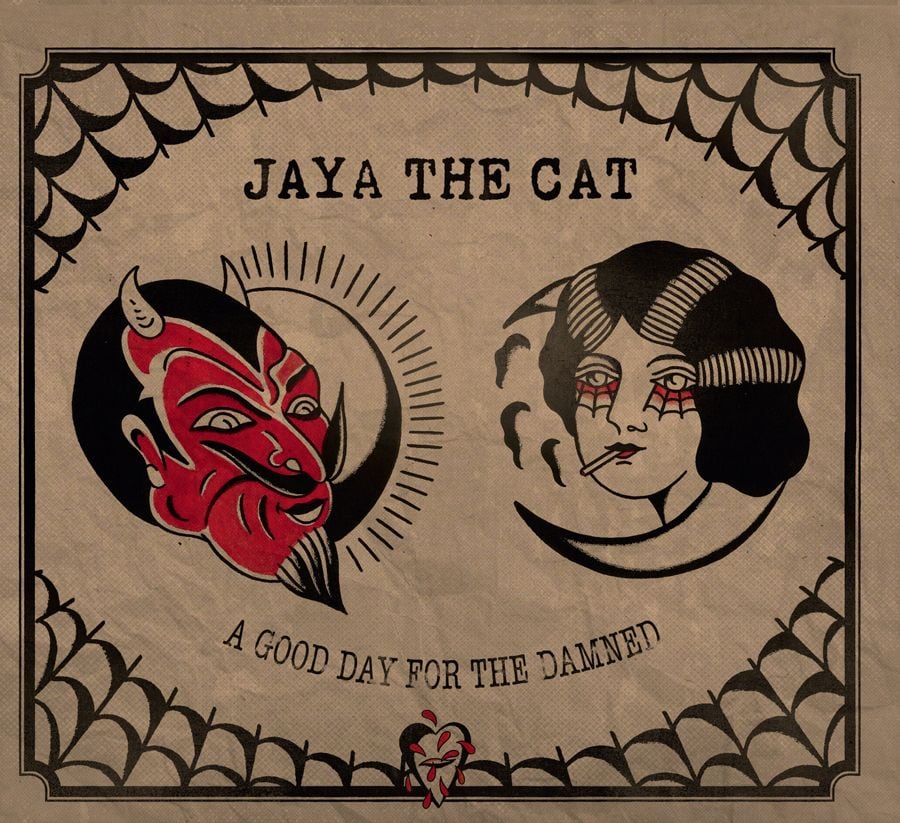 It’s been more than half a decade since reggae punkers Jaya The Cat released their last full-length “The New International Sound Of Hedonism”. Now the Amsterdam-based band is back with another late night journey through the dark and damp alleyways of their lives.

“The New International Sound Of Hedonism” is such a great album and still finds heavy rotation in my playlist so I was wondering how or what the band would do to continue with the upward trend of their album releases. “A Good Day For The Damned” has a different feel and sound to it all the while remaining familiar with the Jaya sound. One thing that is noticeably new is a more electronic sound to keys, guitars and ambient sounds. While I’m not much of a fan of synthesizers and electronica I think it works in the small doses throughout the album. It gives quite a few of the songs a spooky and trippy sound and adds another dimension to the band’s sound.

As is another staple of the band’s sound, this album is heavy on the reggae and ska vibe. The opening track “Wine Stained Futon” has the grungy punk/reggae sound fans of the band’s first two albums will enjoy. This carries over to the following track, “A Rough Guide to the Future”. Changing things up is the first single and video from the album “Sweet Eurotrash”. This song has a rough reggae vibe coupled with some distortion and reverb guitar. The sound of the song perfectly fits the dirty, grimy debauchery contained within the lyrics.

Let’s not stop here with the track-by track review. The fourth song on “A Good Day For The Damned” gives us another curveball with a sweet upbeat ska number complete with Mexicali horns singing in the background. “Huddlersfield Rain” is a danceable and moshable punk/reggae number with a driving beat and some great sing-a-long choruses. “Just Leave Me There” is one of the hardest songs on the album and gets your blood pumping for a circle pit.

I’ve only covered six songs on the album so far and you have everything to dub-influenced reggae, punk rock, ska and ska punk so far. Are you looking for some ska and reggae sounds? “Fucking In Love” is a soulful ska number that will sink its hooks into you and keep you singing along long after the track ends. “The Palm Reader’s Face Looks Shocked” sounds like a modern homage to the Specials “Ghost Town”. “Sunday Morning” and “Mad at You” bring the punk edge to the table while tracks like “Wreckage” and “The Streets of Shoreditch” invoke Billy Bragg and the Clash.

One of the things that I’ve always enjoyed about Jaya The Cat is their “down-to-earth no matter how fucked up” lyrical sensibilities. Sometimes they’ll be telling tales of drug and booze fueled mayhem and the other they’ll be telling a somber tale of love and heartbreak. Other times they’ll smack you in the face with a social or political number while other times they’ll invite you into their shattered minds to indulge in personal reflection and insights. No matter the topic, the songs are always genuine and not just album filler.

“A Good Day For The Damned” is yet another gem in the bands’ discography. No matter the mood you’re in, you can put on this album and feel something different. I’ve been a fan of the band for a many number of years and it’s because every album has a different feel to it. As is with every great band they just keep getting better with each and every release. I just wish that I wouldn’t have to wait so long between releases!

Bottom Line: “A Good Day For The Damned” takes you on a reggae/punk/ska/dub journey through the course of 16 tracks that will get you thinking and dancing. If it doesn’t then you’re probably an android.
Notable Tracks: Sweet Eurotrash, So Fucking In Love, Black Heart, Huddersfield Rain, The Palm Reader’s Face Looks Shocked, Drunk Balloon
Overall Rating: