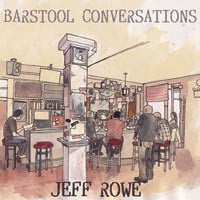 Jeff Rowe is a football quarterback who has played for Bengals, Seahawks and Patriots. Obviously I’m not being 100 percent truthful with you because THIS Jeff Rowe is actually an acoustic rock musician. But there is a quarterback of the same name, I just don’t know if he’s as good as musician as this Jeff Rowe is.

Jeff Rowe used to play in the Massachusetts band Boxing Water and Tomorrow the Gallows. I never heard of those groups but that’s okay, I’m here to talk about Jeff Rowe’s solo album “Barstool Conversations.” Jeff plays personable acoustic rock, with just a hint of punk rock, southern rock and other styles. You can tell he played with heavier bands in the past just from the way he sings. The main focus on this album is Jeff’s vocals, and they are the most prominent. You can really sense the angst and how he feels when he sings. That’s important to me, when listening to solo acts, seeing how they emphasize certain words or verses.

Also, Joe McMahon of Smoke Or Fire guest vocals and plays harmonica on a few tracks so that’s pretty cool. Few others guest on the tracks as well like producer Lance Koehler, Jonathan Schoeck and Steve Terry. While I didn’t like all of the tracks on this album, there were a few tracks that stood out (see below). If acoustic rock is your thing, perhaps Jeff Rowe’s new CD will be something you’ll like?