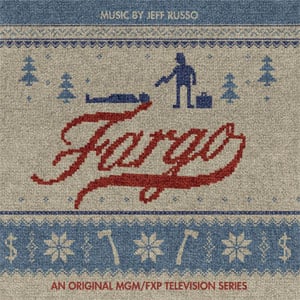 Jeff Russo of Tonic has composed a pretty damn good TV score for the TV series Fargo. I didn’t even know Jeff was a composer; it just seems natural for rock musicians to become composers these days.

Believe it or not, I haven’t seen the original Fargo movie by the Coens Brothers and haven’t seen the series yet. Is it still considered a mini-series when it got picked up for another season? Fargo features a bunch of new characters and storyline, set in Minnesota. It stars Martin Freeman, Billy Bob Thorton and I’m looking forward to seeing it soon.

“Bemidji, MN (Fargo Main Series Theme)” is a really good theme and probably one of my favorite tracks on the soundtrack. The theme and the motifs used in the score have a folk sound to it since the main instrument is a violin/fiddle. The overall sound is very dark as well. The track “Murder” has a very Thomas Newman kind of feel to it. Something you’d heard in Road to Perdition or Shawshank. Besides your typical classical sounding score track, “Wrench and Numbers” is a good example of rock being used into the score.

From what I read, Russo pays homage to the original score by Carter Burwell. I’m not familiar with Burwell’s score either so couldn’t tell you much about the comparisons. I can tell you that the score makes me want to watch the show since it sounds really good! I thought it might be another boring TV score (that isn’t Game of Thrones) but this wasn’t the case at all.

A lot of the tracks are under two minutes long. What is this, a punk rock album? The soundtrack flies by and makes you want to hear more. I guess we’ll get our chance with season 2.