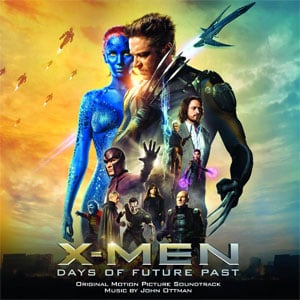 X-Men: Days of Future Past is finally here and so is the originally team of Bryan Singer and composer/editor John Ottman.


They always work together and their track record has been a good one. I loved what Singer did with X-Men and X2, so I was glad to see him return to the franchise. Matthew Vaughn was excellent with X-Men: First Class as well, so either one would have been fine for me. As long as it’s not director hack Brett Ratner, whose pile of shit X-Men: The Last Stand had to be corrected with this movie. I saw Days of Future Past and it was probably the best in the X-Men series. X2 will always be close to my heart too because it had Nightcrawler in it. He better be in the next movie!

The score starts off with “The Future: Main Titles” and it’s a familiar theme that you should remember from the first two movies. What’s lacking is any motifs from X-Men: First Class, which is a shame because Henry Jackman had some awesome themes for the original X-Men team and ones for Magneto as well. Why couldn’t Henry Jackman and John Ottman team up like a James Newton Howard and Hans Zimmer did for the Dark Knight trilogy?

With that said, Ottman still delivers a powerful, emotional and sometimes dark score. The beginning of the score is memorable with the main titles and “Time’s Up,” but then a lot of the tracks in the middle are dark, slow and forgettable. They work in the movie but listening by itself, gets kind of boring. It’s doesn’t get exciting again until you hear the film version of “Time’s Up,” later on in the soundtrack, followed by “The Attack Begins.”

Besides the score, ending the soundtrack is two songs you heard in the movie. The first is Jim Croce’s “Time in a Bottle,” which is from the soon-to-be-famous scene with Quicksilver. The other is “The First Time Ever I Saw Your Face” by Roberta Flack and that’s from the scenes with Wolverine waking up in the past.

The movie itself is really, really good and the score isn’t bad either! The beginning and the ends of the score are the best, and the middle is kind of blah to me. It serves its purpose in the movie though.