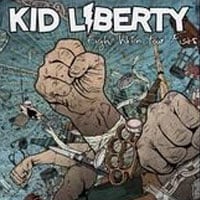 Never heard of Kid Liberty, but they are one of the many bands that sound the same so I guess it doesn’t matter if I never heard of them before. Whatever style this band plays, they should just stop trying to make music all together.

Do you ever put on a CD and just know you’re not going to get through the entire thing? That’s how I feel for Kid Liberty’s Fight With Your Fists. Atrocious vocals over clunky songs. It’s like a whiny emo band decided to play heavy music to fit in with the latest trends. The first few tracks “Fight With Your Fists,” “This Is A Stick Up” and “Coolguy Deluxe” are good examples of that. Honestly, that’s how the entire album is though. I tried to give Kid Liberty a shot but it just didn’t happen. Maybe I would like this band if I didn’t know any better…