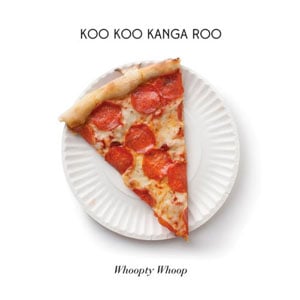 When I first saw Koo Koo Kanga Roo, I was immediately confused on what I was seeing. After seeing the silly dance party duo twice now, I’ve become a fan of their music. It’s not for everybody but once you figure out what you’re listening to, it’s a good time.


Their latest album is Whoopty Whoop and it’s released on Mike Park’s label Fun Fun Records. The label is dedicated to creating children’s music that isn’t terrible like The Wiggles. That gives you an idea on what you’re getting when it comes to Koo Koo Kanga Roo. I thought they were a perfect opening group for the Aquabats, because both bands can be for children and adults…or adults who act like children.

Koo Koo Kanga Roo’s music is part dance, part ’90s hip-hop, part Weird Al Yankovic with an extra topping of fun! When you have songs about Unibrows and eating pizza, you know you can’t take these guys too seriously. The first song is “All I Eat Is Pizza” and its very synth heavy. Just everything you know about pizza, put into one fun song. I love pizza too so this song was a hoot to listen to. With this first song, you’ll either be on board with the band or feel completely disgusted with what you’re hearing. I think if I heard this album before seeing the group live, I would have felt disgusted. I think once you see the guys perform live, you just get it and by the end of the set, you’re dancing and jumping around like a stupid idiot.

“The Coolest Person” is the best song Koo Koo Kanga Roo have on this album. I keep listening to it over and over again, and it’s embedded into my brain (in a good way). It’s catchy, and I like the chipmunk sounding effects in the background. It reminds me of the 80s hip-hop dance groups like New Edition. Another group that comes to mind is that one that does that song “Wiggle It.” That cheesy 90s dance/hip hop stuff I listened to growing up. Hey I wasn’t always into punk rock and ska!

If you like songs about random stuff, like to dance and act like a moron, you’ll love Koo Koo Kanga Roo’s latest album. If not, well, you don’t have a sense of humor and probably like to murder kittens by the dozen.