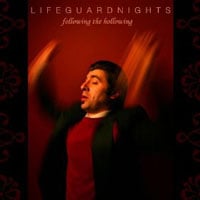 The 7th solo album from the Lifeguard Band’s Vincent Brue, though it was recorded after their 2nd. It’s all very confusing. This guy records great music like it’s his job.

And he is consistent. While he tries out different styles and approaches, the quality is always far above average at worst, and top notch at best, thanks to smart, poppy, driven songwriting, sharp lyrics, and vocals that can be described as Lou Reed with range.

“Following the Hollowing” is a particularly excellent set of toe-tapping jangle pop. Singer/songwriter and alt-country stuff are evident but with an enjoyable, positive indie-pop vibe. No maudlin sadsackery here. Even the simple, downtempo tunes “Love’s Worth Waiting For” and “Sad Sunrise” are immensely catchy. How the hell does he do it?

Vincent Brue continues to be one of the best unknowns. It should be pointed out that he writes, performs and produces all his music, and yet vanity and self-indulgence are missing. Most one-man bands get lost in their own heads but Brue has a great sense of what sounds good to other people.

I’m not going to make comparisons to the legendary pop writers or it’ll seem like hyperbole. But he’s up there. And no – I don’t know this guy, have never even exchanged an email. But for someone with under 900 myspace friends (my cat has more), he’s already released at least 100 unbelievably excellent songs. If you like great, independent singer/songwriter pop, you’re not going to find much better.