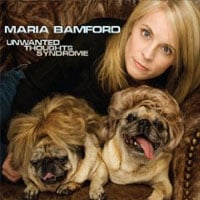 I’m not too familiar with Maria’s stand-up but I didn’t find her material & her act all that funny. I don’t even think I laughed. I’m not sure if her stand-up is supposed to be more visually but on CD it didn’t work for me. Her voice is annoying, and all the different voices that she does make it seem like she’s trying too hard to be funny. But I guess that’s her style? The stand-up act went by fast, but it might have been me skipping the tracks in hopes of something funny coming on. I hate to be harsh for comedians but there’s something about Maria Bamford that I just don’t find funny. It’s not “my cup of tea” I guess? If you’re interested in her, the DVD seems cool. It features 90 minutes of video shorts, which originally appeared as ‘The Maria Bamford Show’ web series on Super Deluxe.

Bottom Line: I didn’t find her stand-up that funny
Notable Tracks: Wizard of Art, I Miss Working In An Office
Overall Rating: