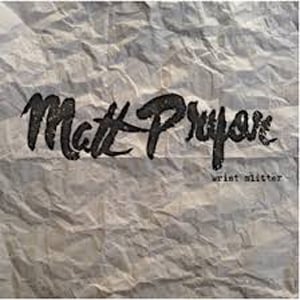 Known as the lead singer for seminal emo band the Get Up Kids, Matt Pryor has been known to expand upon his musical styles touching upon folk music, indie rock and children’s music to name a few. “Wrist Slitter”, Matt’s first true solo album away from the Get Up Kids, expands on them even more.

There are a lot of musical genres to choose from on “Wrist Slitter”…glam rock, pop punk, bluegrass, pop rock…pick your poison. I’ll have to admit that there are quite a few songs on the album that are just downright catchy as hell, whether it’s a catchy chorus or just a guitar riff that gets embedded in your head. With a title like “Wrist Slitter” it’s much more of an upbeat album than one would expect.

If there were one fault that I could find on this release…and I hate to say it…is that there are so many varieties of music from track to track that sometimes it feels like you’re listening to a compilation album. Either way, most of the songs stand strong on their own. I also love the fact that the album starts with a punk song and ends with a punk song. They make good bookends.

While I wasn’t quite sure what to expect from “Wrist Slitter”, I was pleasantly surprised with the quality songwriting, the upbeat feel of the album and, even though the songs jump genres like a third-wave ska kid, it doesn’t necessarily take away from the overall sound of “Wrist Slitter”. Definitely a fun listen and an unexpected good time.

Bottom Line: Fans of Matt Pryor, the Get Up Kids and any of his offshoot bands will definitely want to add this one to their collection. The songs are catchy and are reminiscent of the early Get Up Kids stuff with a more expansive musical touch.
Notable Tracks: Wrist Slitter, The House Hears Everything, Words Get In The Way, Won’t Speak To Me
Overall Rating: