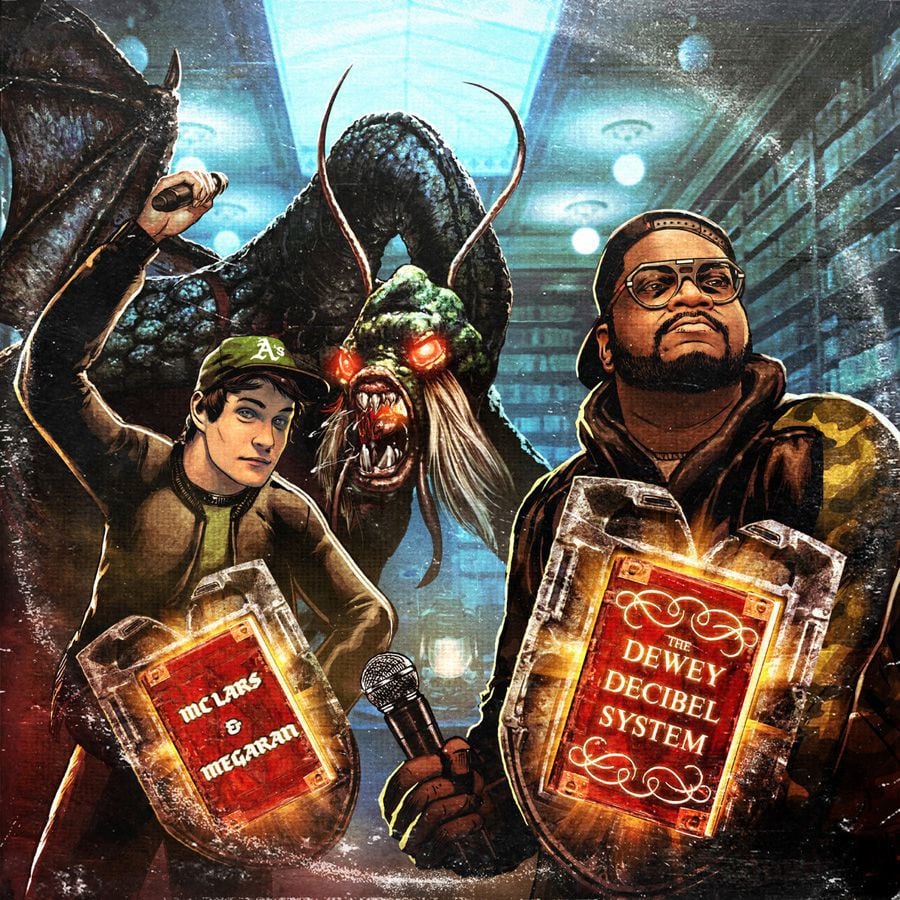 “The Dewey Decibel System” is the latest release from Nerdcore aficionado MC Lars and is collaboration with fellow Nerdcore legend Mega Ran.

The underlying theme of this release is the various books that MC Lars and Mega Ran grew up with and love. There are songs about Gulliver’s Travels, Julius Caesar, Sleepy Hollow, the Jabberwocky and even Alan Moore’s “Watchmen” graphic novel.

To some, an entire hip hop album about books and literature probably sounds ridiculous and uninteresting but then again those people most likely have no knowledge of the masterful lyricist and musical genius that MC Lars is or of the concept of Nerdcore in general. Add Mega Ran into the mix and you’ll get a semblance of the amazing things that these two MCs can create.

After the self-titled introduction track gives you a taste of what to expect on “The Dewey Decibel System”, things kick off with one of the edgiest songs on the record with “1984” based on the dystopian George Orwell novel of the same name. The driving beat of the drum and base are paired with one of the sickest guitar riffs you’ll hear this side of Slash’s hair.

The next track brings a song about poetry and potter y to the table with “Ode To A Grecian Urn” and exemplifies MC Lars and Mega Ran’s humorous style. “Gulliver’s Travels” follows that up and continues with some funky groovy beats and witty humor that is fitting for the weirdness and oddities found in the tales that the song is based off of.

While MC Lars is obviously known for his hip hop beats and Nerdcore jams, he also has a love for ska music and he gives us a great one with his updated tale of “Bartleby the Scrivener” by Herman Melville that brings Bartleby to the modern tech world with a dashing dose of third wave ska courtesy of Stacked Like Pancakes and plenty of pop culture references abound. The song is catchy as hell and it makes me both happy and sad at the same time. Poor Bartleby.

The remainder of the album kicks it with songs about Ozymandias (not the Watchmen character) as well as Ozymandias (the Watchmen character), “Walden” by Henry David Thoreau, “The Masque of the Red Death” by Edgar Allan Poe and a song based on “Between the World and Me” by Ta-Nehisi Coates, the most modern book referenced and the most lyrically poignant and serious of all the tracks on “The Dewey Decibel System” The book focuses on the struggles and realities of being black in the modern America and MC Lars and Mega Ran provide a haunting statement on modern society and the issues that should long be put behind us.

If you haven’t heard of Nerdcore, MC Lars or Mega Ran before, you’ve obviously heard of some of the material that they’ve referenced on “The Dewey Decibel System”. Out of shear curiosity and civic duty, you owe it to yourself to take a listen and then try not to smile and simply enjoy some creative geniuses at work in their element.

Bottom Line: “The Dewey Decibel System” is an album dedicated to an influenced by a variety of literary works and takes those pieces of fiction and crafts them into something the likes of no one has ever heard before…and it absolutely works!
Notable Tracks: 1984, Ode To A Grecian Urn, Julius Caesar, Bartleby the Scrivener, Between the World and Me, Watchmen, Gulliver’s Travels
Overall Rating: