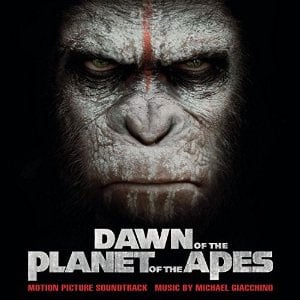 The latest Apes movie is Dawn of the Planet of the Apes, the sequel to Rise of the Planet Apes. I haven’t seen either movies but I will at some point. The score for the last movie was done by Patrick Doyle, this time it’s done by Michael Giacchino.

Giacchino is one of my favorite composers these days, especially with his scores for Up, Lost, Super 8, John Carter, Star Trek and Star Trek Into Darkness. It’s something about Michael Giacchino and the type of scores he composes that I like. He brings out the emotion, the character’s life & depth within his music. His style just works for me and it works for this score too.

The Dawn of the Planet of the Apes has 19 tracks in total and there’s quite a few Giacchino gems in here. The first track I noticed was “The Great Ape Processional.” It’s a sweeping melody and then gets quiet towards the end with the piano. There’s a few tracks that have some horn flares/xylophone (or something similar) motifs that remind me of the old Planet of the Apes movies. One things for sure, Giacchino knows movies! For the most part, the score has a lot of action cues and probably works really well for the movie. There’s a few tracks that really stand out but for the most part, the overall album blends in together.