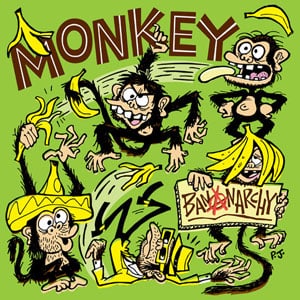 The San Francisco ska legends are back with their long-awaited follow up to 2009’s “Lost At Sea” and the title says it all…it’s bananas!

Monkey doesn’t mess around when kicking off “Bananarchy”. The first half dozen songs are pure third wave/two-tone bliss. “You’re Becoming A Jerk” deals with that “I-told-you-so” kind of person that we all have in our lives while fixing us up a fast skankable beat. “Blind Faith” lets Monkey’s horn and rhythm sections shine with a beat that will get any rude boy or girl dancing while the songs “The Epic” and “The Curse” (two separate songs) keep things blazing on with “The Epic” probably being the fastest song on the album.

Things slow down with the with the instrumental track “Can of Worms” which borrows most of its rhythm from Prince Buster’s “Rough Rider”. “Bicycle” is on the faster side and has a great sing-a-long feel to it. “Bad Neighbor” is a good mix of a sing-a-long, danceable track and one of my favorites on the album. “Caffeine” is another instrumental that is heavily influenced by salsa with a ska backdrop. “Lazy Boy” is one of the slower songs on the album and it has a soul/Motown feel to it. The last of the ten tracks on “Bananarchy” is an acoustic ska track titled “Johnny”.

While “Bananarchy” runs somewhat short with only ten tracks and roughly a half an hour run time, it’s not the quantity that counts, it’s the quality. This is a solid follow up to “Lost At Sea” and a very good two-tone/third wave ska album. The songs are solid, fun, catchy and very danceable. I can see these songs being a staple in the bands live performances much to the delight of the audience.

The only issue that I have with “Bananarchy” would be the sound levels. I’m not sure if this is due to the recording process or just in the digital download, but the album sounds low and muffled at some points. I just cranked it up louder and it sounds fine to me. Other than that, the album is one of the better ska albums of the year so far. It’s good to get a new album from Monkey after a long wait, and it was worth it.