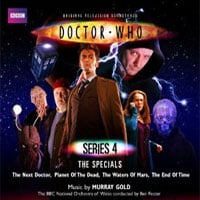 Doctor Who: Series 4 – The Specials is a compilation of score tracks from the Doctor Who series Specials from 2008-2010. I’ve said this before but I’m not a Doctor Who fan. From the scenes that I saw, it just looks too weird for me; maybe one day I’ll try to sit down and watch an episode and see if I like it. That doesn’t mean I don’t like the score for it though.

Murray Gold composed the music, with Ben Foster conducting the music. The score can be uplifting and grand; like something you’d hear from the late John Barry or John Williams. A James Bond score, filled with horns and sweeping strings. Since the show is a science fiction show, the score brings out those elements as well. There’s also a lot of quirky, action tracks like “A Bit of a Drag” and “Hidden in the Closet.” From the Doctor Who and spin-offs that I heard, I always liked when the score incorporates choir singing in it. You can hear a bit of that in the track “We Shall Fare Well,” which starts off disc 2. The action cues stand out but so do the slower, more emotional tracks like “Gallifrey” and “A lot of Life Behind Us.” All in all, not a fan of the series but I always seem to enjoy the music. The two-disc set is worth owning if you like the series and film/TV music.

Bottom Line: Not a Doctor Who fan but I’m a fan of the music!
Notable Tracks: A Victorian Christmas, Lithuania, We Shall Fare Well, All in the Balance,
Overall Rating: