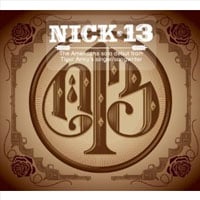 Nick 13 of Tiger Army has finally released his long-awaited, debut solo album! I’ve been looking forward to it and it doesn’t disappoint. If vintage Country music & honky tonk is your thing, this is for you!

It’s almost 110 degrees out in New York today and I couldn’t think of a better album to put on right now. Nick 13’s vintage country & Americana style makes me think of hauling ass in a Cadillac, driving in a desert somewhere. Nick has always had this style, especially in Tiger Army. Songs like “Outlaw Heart ” and “Through the Orchard” were an indicator of that. The later is re-worked for this album, which was nice to hear. It’s really slowed down this time around. Wouldn’t really make sense to just re-do the same song and tempo.

“Carry My Body Down” is a song I heard earlier before the other songs and it’s one of the better tunes. “101” reminds me of a good driving song, and something Mike Ness would like too. The music isn’t too complex, which isn’t really a bad thing. The selling point to this album is Nick’s soothing vocals and the twangy guitar playing. I always love hearing the slide guitar in country music. In “Restless Moon,” the listener is treated to subtle accordion playing as well. Fiddle playing is done in the track “Someday,” which I can’t complain since I like that. Makes you feel like grabbing your special lady and twirling her around.

I’m sure people will say they are sick of seeing punks going country or folk (Mike Ness, Frank Turner, Tim Barry, Chuck Ragan, Nikola Sarcevic, etc.), and I can see their argument. But I think Nick 13 is genuine because he always played rockabilly, which is a form of country music. Even if country isn’t your thing and you enjoy the music of Tiger Army, give this a listen. You might surprise yourself and like the album. This is the type of country that I like and I’ll be listening to this album inside and out for a long time.