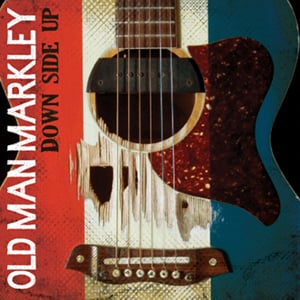 There are dozens of punk bands that say they have bluegrass/country roots and all you get out of them is a standup bass sound with the occasional twangy guitar and possibly a Social Distortion cover. Old Man Markley are quite a few cuts up above the rest.

“Down Side Up” suffers from the serious mix of great songwriting combined with bounds of musical talent and dozens upon dozens of layered and unique instruments. How many Fat Wreck Chords albums contain a kazoo solo? Count them. I dare you! That’s what I thought. There are fiddles and banjos and washboards galore all the while fitting in seamlessly into the flow of a punkier sound slightly reminiscent of Flogging Molly if they were formed in the Smoky Mountains.

Old Man Markley have a genuine working class feel and that is very much apparent in their songwriting. Songs like “America’s Dreaming” and “So Much More” follow their positive train of thought dealing with everyday working class America. The band also has its share of fun moments. “Come Around Here” is a romping good time complete with kazoo solo and reminds me of an early June Carter song while the banjo picking track “Beyond the Moon” provided me with one of the funniest lines I’ve heard in a song since the Aquabats released their last album. “Don’t wanna lose my mind like Gary Busey did. Once upon a time he was the same as you and me. And if I lose my mind like Gary Busey did, promise me you’ll stay around and keep me company.” It also ranks up there with the Vandals “Play That Country Tuba Cowboy” as only the second punk song ever to include a tuba. Sweet!

From start to finish, “Down Side Up” was a nonstop good time through and through. The sound was very unique with plenty of variety, strong songwriting and equally strong musicianship. Old Man Markley were a surprise for me having never listened to them before. I’ll be looking forward to them from now on.

Bottom Line: A unique blend of punk and bluegrass folk. Not your typical Fat Wreck Chords sounding band, but a great listen nonetheless.
Notable Tracks:Beyond the Moon, Up Side Down, America’s Dreaming, Come Around Here
Overall Rating: