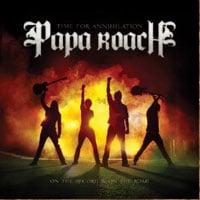 That band that did that one song that was on the radio a lot in the ‘90s have a new album out. I wouldn’t even know if this band still existed if this wasn’t sent to me. “Time For Annihilation..On the Record and On The Road” is Papa Roach’s 7th studio album and first live album. Kind of odd putting both live and studio tracks on a new album but I’m sure Papa Roach fans will take what they can get.


“Burn” opens up the album and it sounds okay. Papa Roach isn’t a bad band, but it’s not something I usually listen to or like. Personal opinions aside, Papa Roach’s is pretty good and catchy. Their style has shifted more to a hard rock sound than a crappy nu metal style. I liked the second track “One Track Mind” and thought it was one of the best songs on the album. The rest of the studio tracks are hit or miss. The live material is better I think, and you get to hear songs like “Getting Away With Murder,” “Time is Running Out” and of course “Last Resort.” Papa Roach may not be a band I listen to but this wasn’t all that bad.