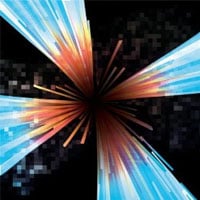 Armed with arena rock spirit, cheap synths, and an alto saxophone, PPP is doing something interesting, to say the least. And unlike their messy, too-artsy debut album, their new one “Chroma Cannon” is not only energetic but wildly melodic.

PPP have really come together here in a big way. Vocals remind me of a cross between KISS’ Paul Stanley and David Lee Roth – but before you cringe, it works well over the fist-pumping musical concoction they’ve whipped up here. Fast, buzzing synth and chiptune sounds drive the melody, while sax replaces guitar solos. (The press release says they don’t have a guitarist, but it’s hard to tell.)

By injecting some post-punk spazziness and 8Bit goofiness, PPP succeed in giving arena rock a fresh and fun twist. To the credit of their songwriting, they do so without sounding ironic or gimmicky. Worth a listen.