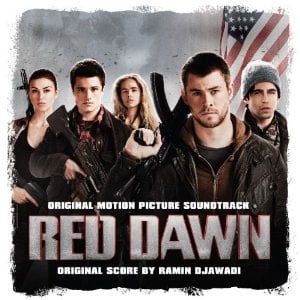 Red Dawn is an 80s movie that starred Patrick Swayze, Charlie Sheen and others and now there’s a remake that involves North Korea and stars Chris Hemsworth and Josh Peck. The first film was an 80s classic in my mind and very dark, which brings up the question: why remake this movie? I do like the premise of the movie of fighting back after American is attacked so I’ll probably watch this eventually, even though I already know this new one can’t top the 80’s movie.


Movie critique aside, composer Ramin Djawadi has been making a name for himself with his extremely memorable theme and score for Game of Thrones. In fact, I’ll go as far as saying it’s probably the most recognizable theme song in the last 10 years! Now with that said, I think his Red Dawn score is just a bit of background noise in a way. It goes through the motions and nothing really wows me. That’s okay, but I usually like the scores I can listen to over and over again. The score is a mixture of modern and traditional scores: Drum beats, fast violins, guitars, computerized effects, etc. I don’t really have a favorite track from this soundtrack but if I had to chose it’s probably “Wolverines.” No idea why I like it, I just do.

I haven’t seen the movie yet but I’m sure the score works well, and offers up enough dramatic elements and action cues. Word of warning, and a bit of pet peeve for me, there are spoiler warnings in the track listing so beware of that!