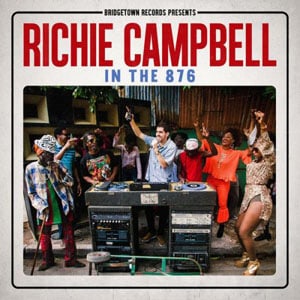 Richie Campbell hails from Portugal, a land that isn’t really known for its reggae roots, but the rising star has been working hard on changing that ever since his career took off back in 2010.

“In The 876” takes me back to the simple, positive and uplifting sounds of reggae in the 80s. The songs weren’t overly complex, the vibe wasn’t overly political and you could just sit back and enjoy a fun reggae album with a sunny outlook on life.

Positivity, peace and love are the overall themes of the album but not in the preachy hippy kind of way. Songs like “Feel Amazing” and “Rise From We Fall” follow the general themes of expressing happiness with life and getting back up when you fall. This is a far cry from a lot of modern reggae that seems to focus more on themes of thug life like violence and hardcore drugs. It’s reggae not gangsta rap, fellas!

If I were to site one thing about “In The 876” it wouldn’t really be a slight on the album as it would be of those sounds of reggae from the 80s that it can be compared to…most of the songs fall into that stereotypical mainstream polished reggae sound and begin to sound similar to each other. There are some flashes of dancehall and rocksteady with songs that include guest artists and a few songs have the pleasure of adding depth with the addition of horns, but most of the songs are a straightforward reggae sound.

I’ll have to say that overall, I found “In The 876” an immensely enjoyable reggae experience. There don’t seem to be very many reggae albums out there carrying a positive vibe anymore. Richie Campbell is carrying the banner of sound that’s not as prominent as it once was as well as bringing attention to the fact that reggae musical still is a global musical force to be reckoned with.

Bottom Line: Polished reggae with an uplifting sound that, at times follows the same beaten path many in the genre have walked before.
Notable Tracks: 25 To Life, Feel Amazing, Give It All Away
Overall Rating: